[Novel Review] Her Sunny Side, A Bittersweet Love Story.

November 01, 2013
It's my second time to read Japanese Novel. First was 'Kitchen' ( that i haven't finished till now) and second was "Her Sunny Side". At first i was attracted by the title "Her Sunny Side". It's so catchy. I also read that this novel will be filmed with casts of two of my favorite Japanese actor and actress : Matsumoto Jun and Ueno Juri. Those two reason finally made me buy this novel. So cheesy,right? :)) 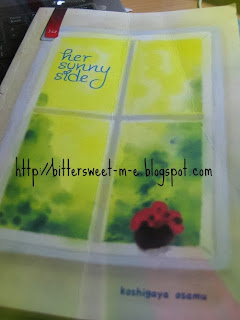 So then i read this novel with full expectation that it won't fail me. Guess what? Less in 10 pages i felt so damn bored.Hoaaamm!! Maybe because of the translation or maybe the Japanese writer often use slow pace, i don't know.  But then as i continued reading it, i think i know why this novel is a best seller.
The story is about two schoolmates who "happens" to meet again after 10 years separated. Okuda Kosuke meets Watarai Mao in their corporate meeting. Kosuke found out that Mao who used to be the stupid fool student in the school turns out to be a beautiful women who success in work. It's like blast to the past to Kosuke. He remembered how Mao used to be bully in school and what other people talk about "naked Mao" walking around the neighborhood in the middle of the night. The woman who sits in front of him is absolutely different.

Soon they started to dating (again). Back when they were students Mao thoughts that Kosuke was "the one" and until now he still remains the same. Mao introduces Kosuke as her boyfriend to her parents. Even though Kosuke seems nice to them but her father doesn't give his bless to this couple. The rejection made Mao thinks of runaway marriage.  At first Kosuke hesitates but then finally agree. They got married soon without their parents blessing.

After they registered their marriage, Kosuke calls Mao's parents to inform their marriage. Apparently Mao's parents doesn't like Kosuke. They just feels it's not right for Mao to get married. Still they can't say anything more but to bless them. Kosuke, the cat lover and Mao who often acts as she pleases finally feel relieved and happy to live their life as husband and wife.

However, it turns out that Mao keep a secret in the past which Kosuke never imagined before. This is the part where i thought "OMG.. the writer is so awesome". While reading it i have some thoughts like "She's probably has some deadly disease." "Kosuke probably is insane" and some more plot possibility. But it turns out... aaahh "AMAZING" i never thought about it yet it's actually on the paper.

There is always a bitterness that accompanies a joy when we love someone. This novel is combines both in a sweet way. And for that reason, i love this novel and recommend it to you.

Popular posts from this blog